Continuing the tradition begun by Florence Griswold of welcoming artists to her boardinghouse, the Museum is pleased to introduce Canadian-born artist Jennifer Angus as its first Artist- in-Residence. Working from March through early June (2019), Angus is preparing an installation that will encompass the entire first floor of the Florence Griswold House as part of the Fragile Earth exhibition. The artist has been living at the Fehrer House in Lyme and using it as her studio. The 1737 house is owned by the Museum thanks to the generous bequest of Catherine Fehrer in 2001, daughter of Lyme artist Oscar Fehrer (1872–1958). Angus specializes in transforming historic spaces and blank gallery walls with a confounding medium: preserved exotic insects. She pins them in beautiful configurations that resemble wallpaper, which from a distance camouflages the entomological specimens until they are examined up close. Well-versed in the history and techniques of textile design as a Professor of Design Studies at the University of Wisconsin-Madison, Angus harnesses the psychological power of decorative art to astonish, delight, and inspire audiences to become environmentally engaged.

Her installation will remain on view until November 10,
beyond the special exhibition dates.

After researching the Lyme Art Colony and the artists’ fondness for amusement, Angus conceived of a fantastical “lost chapter” of the colony history first recorded by artist-visitor Arthur Heming in his book Miss Florence and the Artists of Old Lyme. Angus’s chapter imagines the artists holding an insect-themed party in the House, inspired by the naturalist impulse of Willard Metcalf and others. Angus has installed her insects as “wallpaper” in the House’s hallway, and in each of the period rooms visitors will encounter marvels related to the artists’ merrymaking— including Victorian glass domes glittering with rarities and vignettes of insects dancing or working, Miss Florence’s costume embroidered with iridescent green beetle wings, a 104-drawer cabinet of curiosities created in preparation for the party, and beautiful insect jelly jar “preserves” as party favors.

With Angus piloting our first Artist-in-Residence program, the Museum hopes to advance its development in the future. 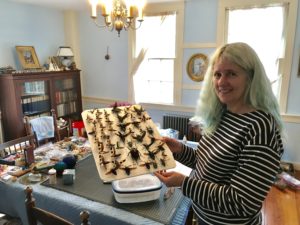 About the Artist's Work

Jennifer Angus (b. 1961) works with preserved insects as her medium, pinning them to walls in ornamental patterns reminiscent of textiles or wallpaper, and arranging them in poses under glass domes or in cabinet drawers. A Professor of Design Studies at the University of Wisconsin-Madison, Angus’s installations create surprising beauty while also informing audiences of insects’ importance to the ecosystem. They pollinate food crops, control parasites and predators, produce silk, dyes, and honey, and decompose matter back into the soil.

Like a historic artist-naturalist in the modern era, Angus collects her specimens in an ecologically sound manner, obtaining many from insect farms and reusing and repairing them over decades. She considers them “ambassadors for their species” working to raise awareness about the importance of preservation. While none of the species she uses are endangered, their forest habitats have been gravely diminished by humans. Inspired by history, Angus’s narrative fantasies open a window on this reality by encouraging viewers to reconsider their ideas about insects as well as our own consumption of natural resources. Angus aims to generate empathy by imposing order on the perceived chaos of nature—the conversion from “pest” to gem occurs through the power of design. 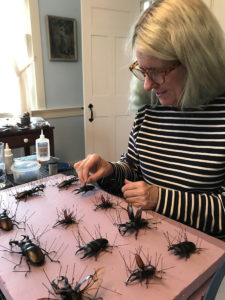